Coronavirus has changed how the world operates and it has shaken up the jobs market in unprecedented ways. As an independent source for recruitment data and insights we want to make sure you have access to updated information and advice.

Applications have risen for the third month in a row and, at 137% above the 2020 average, are now higher than the previous record set in October. They have grown fairly steadily since the second week of February but dipped in the final week of March and, encouragingly, have grown at less of a rate than jobs.

Following a slight dip in jobs in February, March was an extraordinary month for job postings. At 179% above the 2020 average, jobs grew by more than 50% from the previous month. There has been a steady upwards trajectory from the second week of February, culminating in a steep climb in the final week of March, which recorded figures of 196% over the 2020 average.

Following the successful roll-out of the vaccination programme, rapidly falling cases, a stronger than expected January GDP report and planned lockdown easing, the Bank of England stated that its short-term growth forecast would need revising to a higher rate. The governor predicted that the economy will have returned to pre-pandemic levels by the end of the year.

“The amount by which jobs have risen in March is incredibly encouraging. It is a sure sign that the continued efficiency and fast pace of the vaccination programme, combined with the successful progress of the roadmap to easing lockdown is bolstering business confidence. As the economy begins to open up once more, businesses are committing to hiring to ensure staffing levels are adequate for reopening.”

The highest number of jobs posted in March was in the Public Sector (21%).

The highest number of applications received in March was in IT & Internet (17%).

The average number of jobs posted in March was 14.

The highest average number of applications per job was in Finance (61).

The lowest number of applications per job was in Health & Nursing (4).

Most jobs were posted on a Friday but most applications were received on a Wednesday.

Job Posting and Application data and trends recorded on WaveTrackR 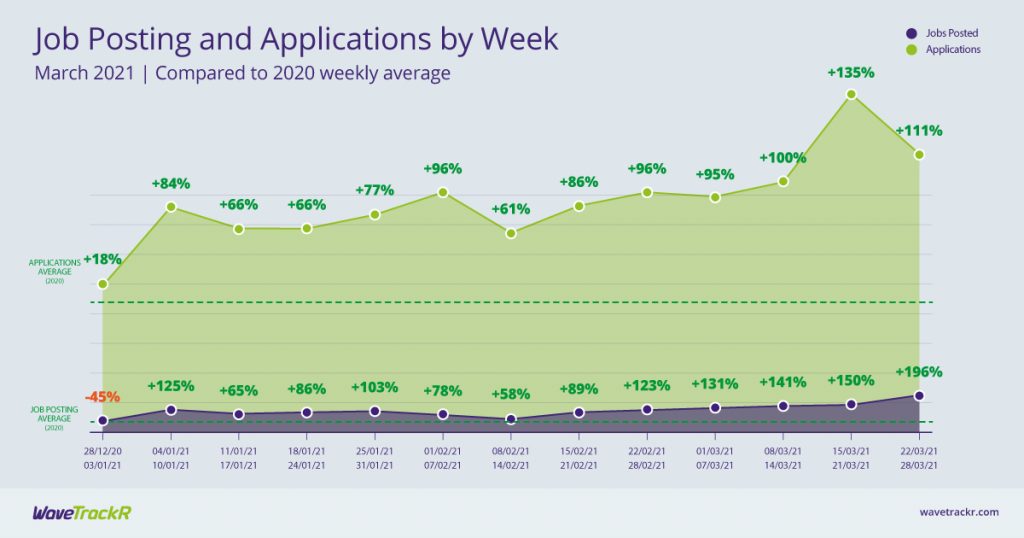 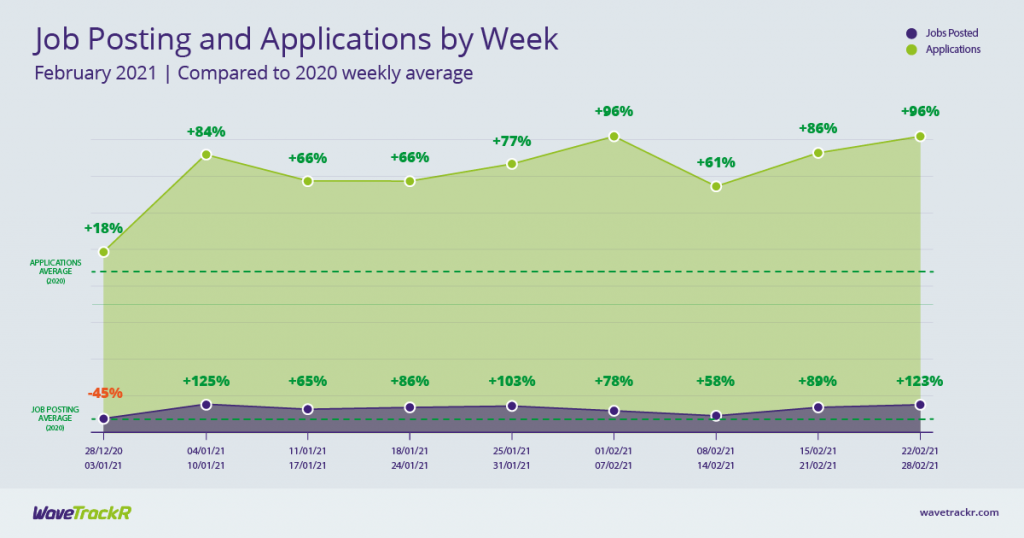 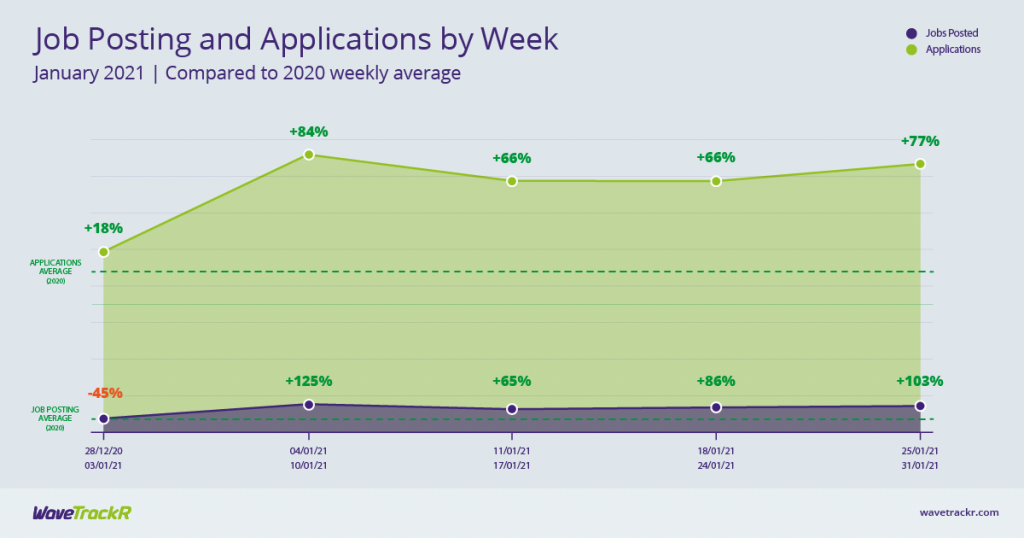 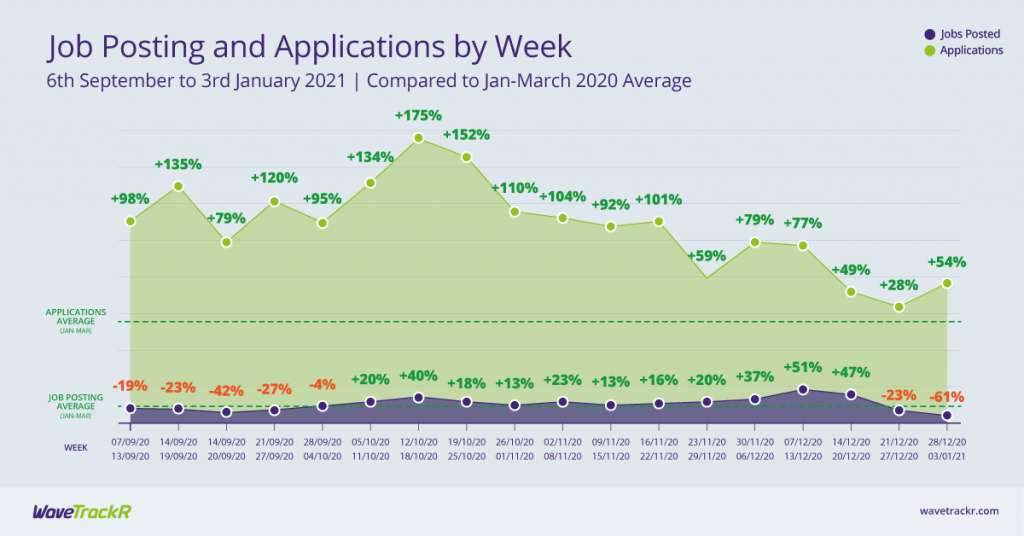 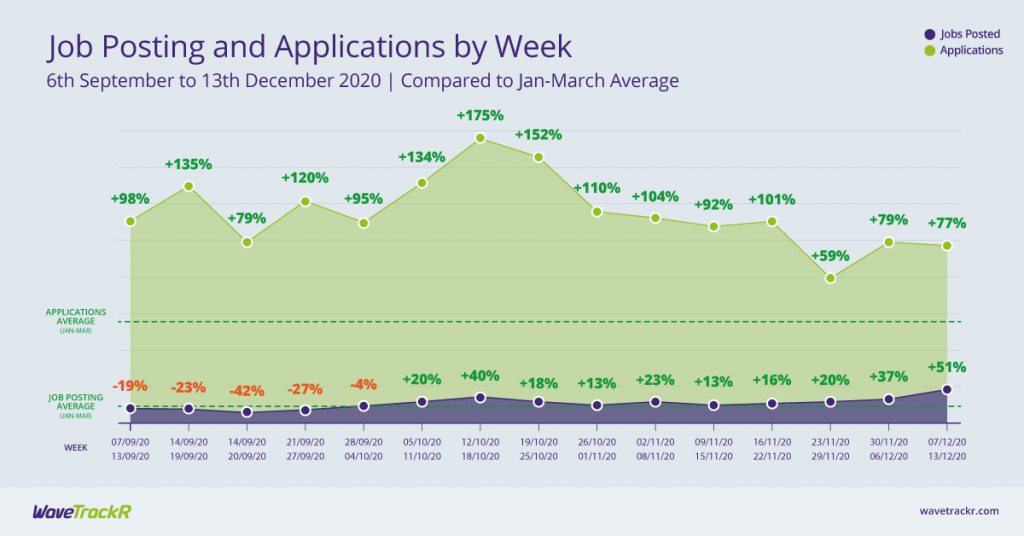 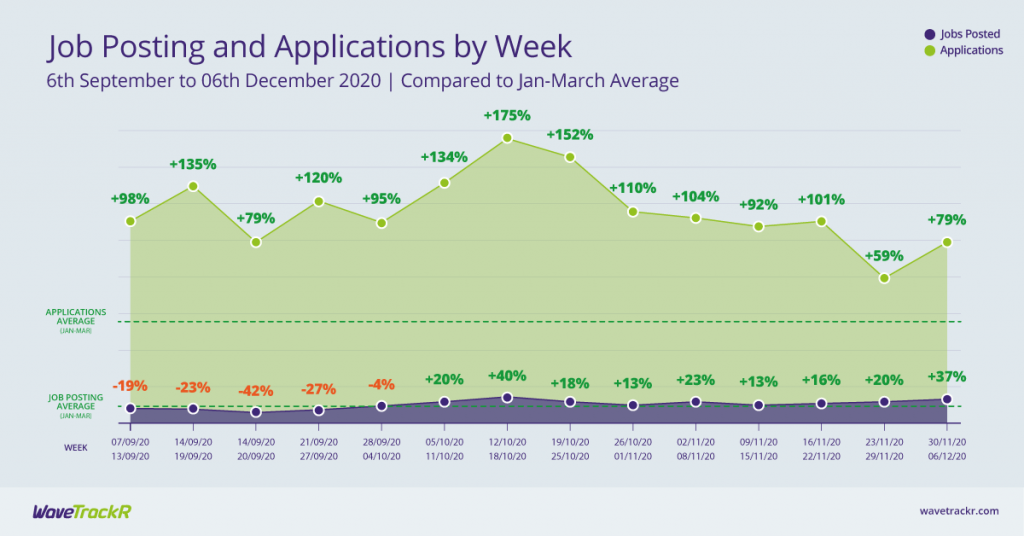 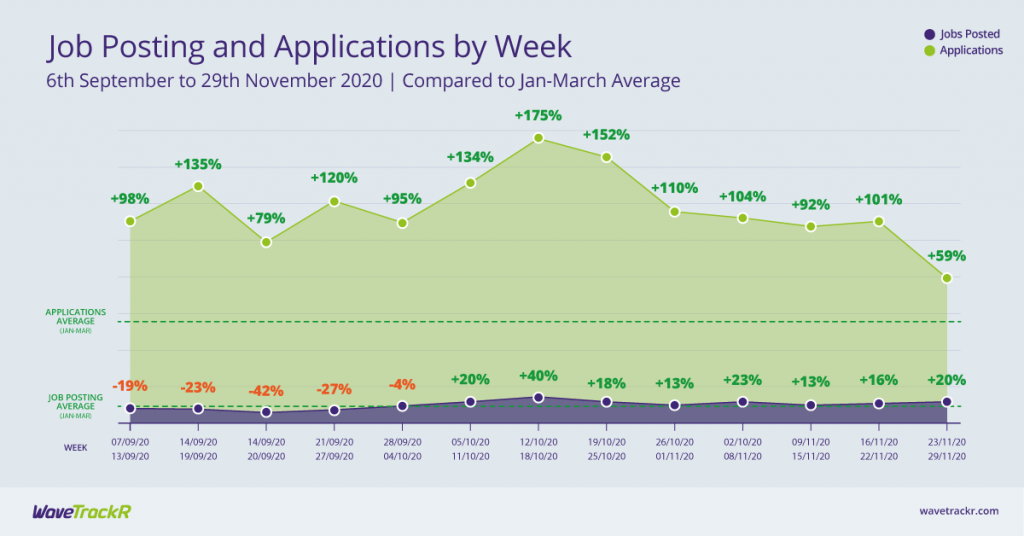 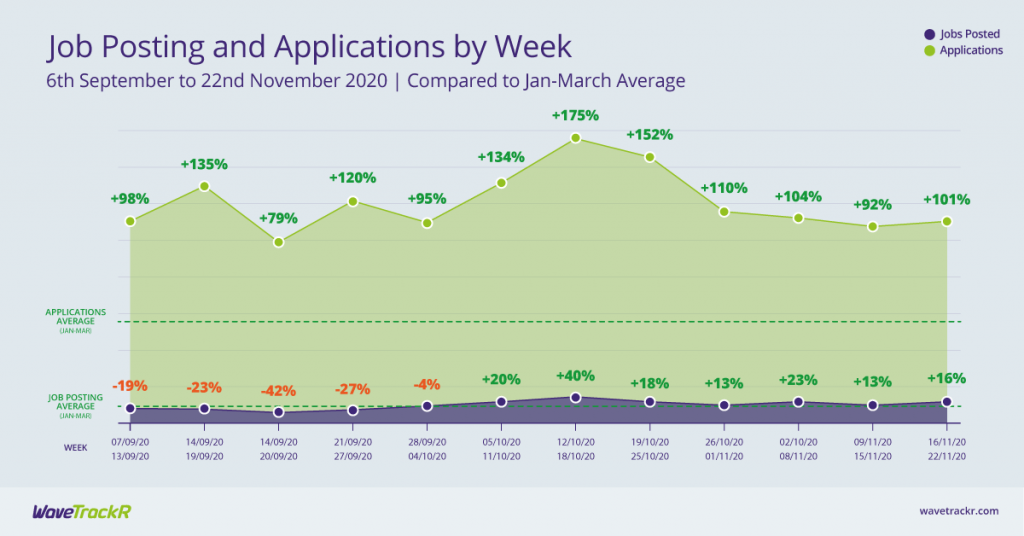 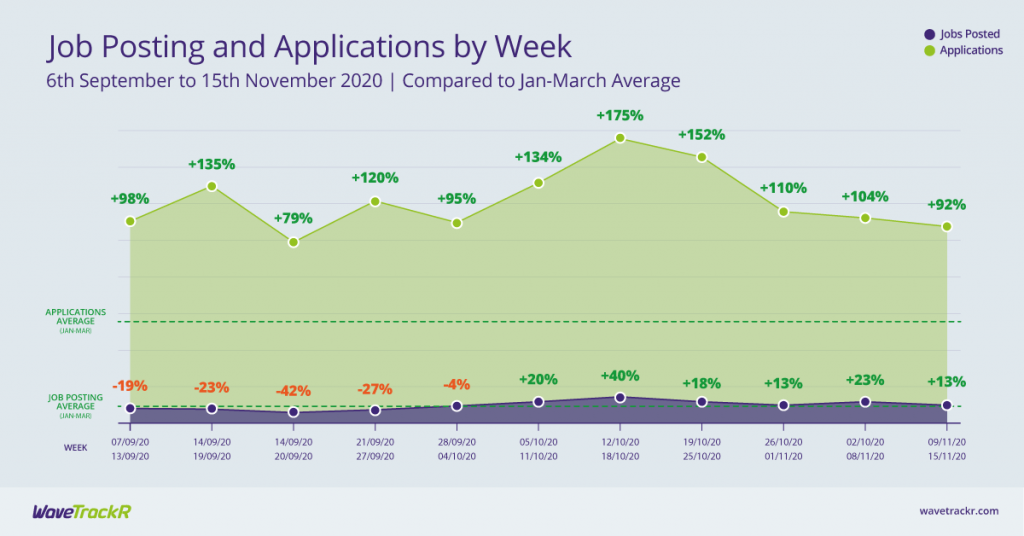 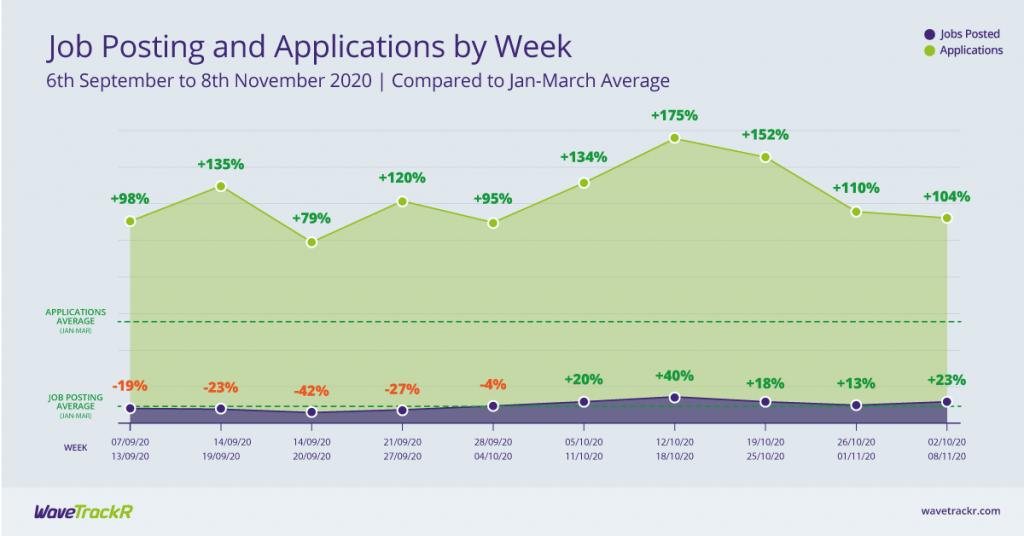 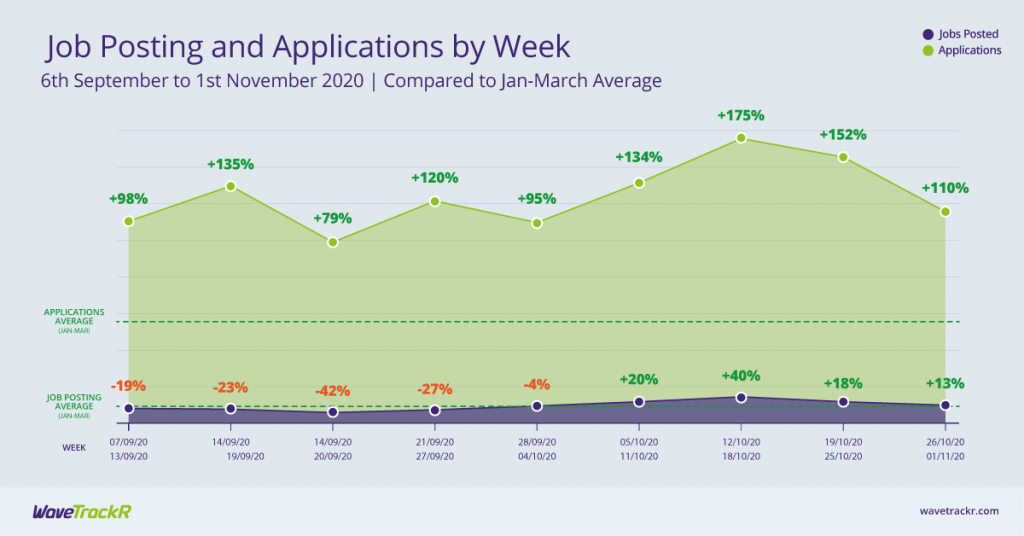 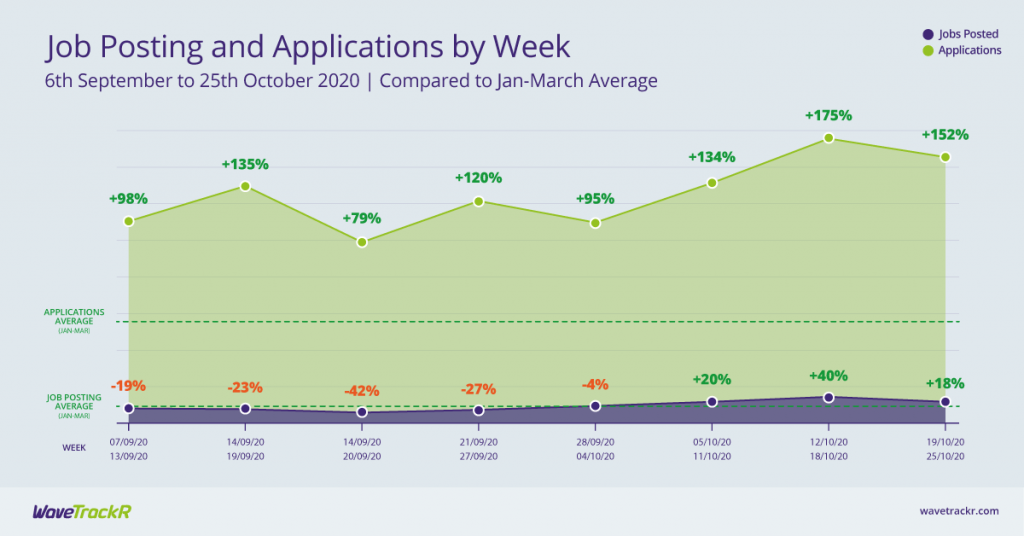 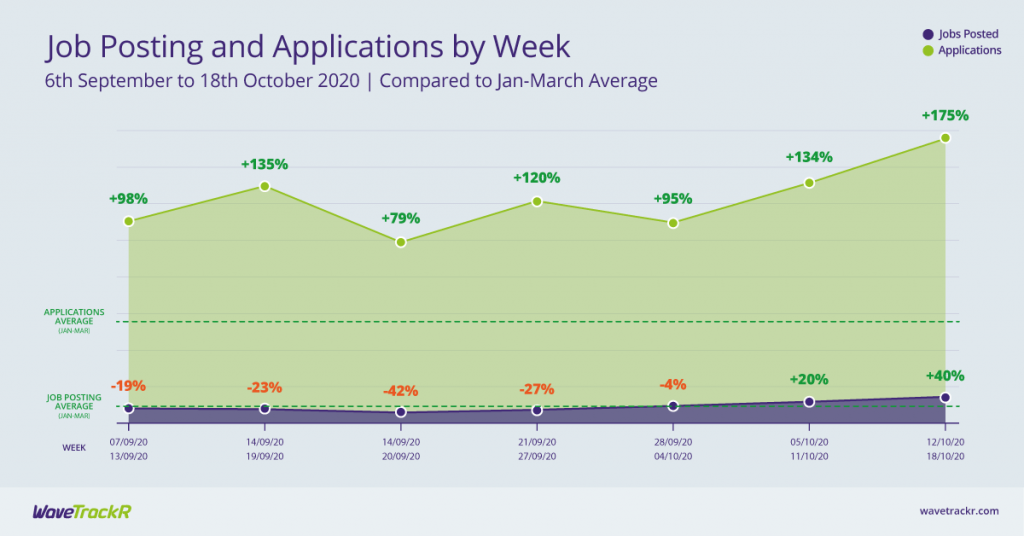 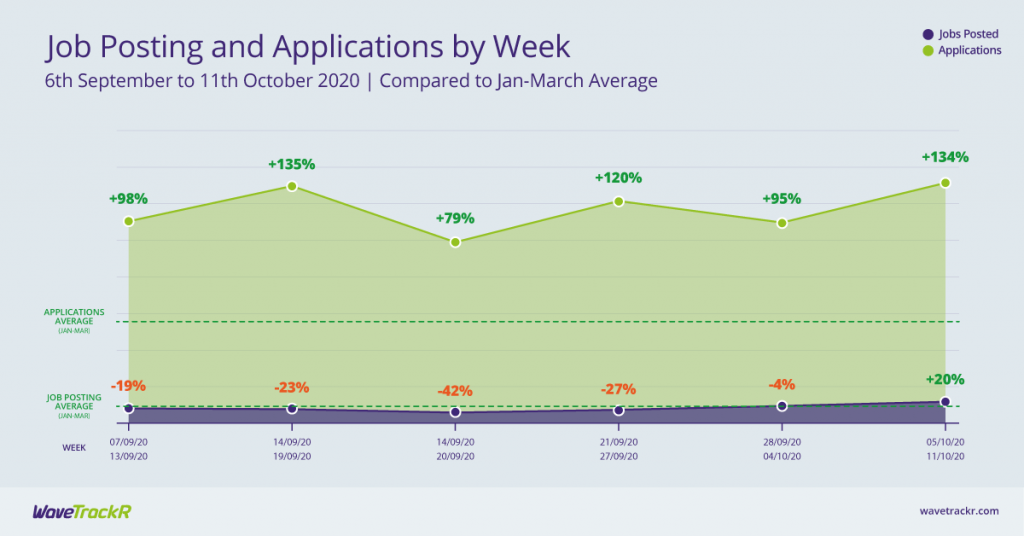 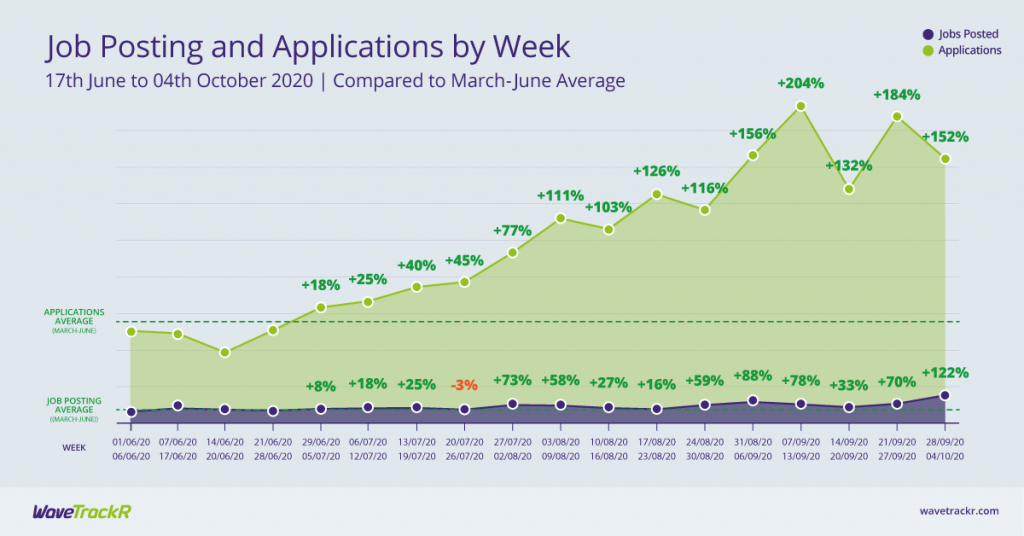 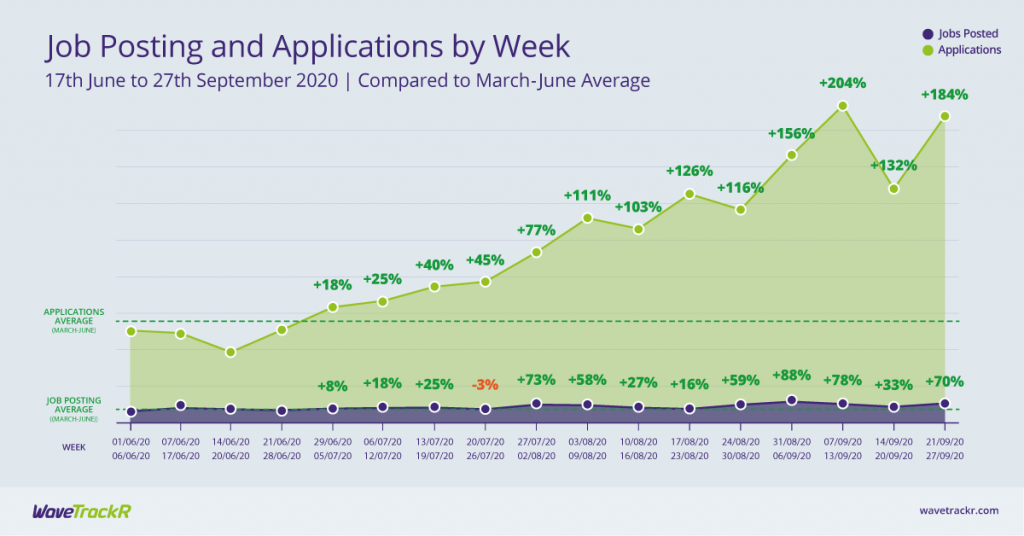 Articles, advice, resources and insights on the impact of Covid-19 on recruitment

Employment down, unemployment essentially unchanged. Those were the latest findings, released August 11th by the Office for National Statistics, in a nutshell. Except they don’t give the whole story.

How Coronavirus has changed the state of the jobs market

How to set up a remote office during Coronavirus

The impact of Coronavirus on the recruitment industry

How temporary work could offer a lifeline for recruiters during Coronavirus

The Impact of COVID-19 on Recruitment

Since the declaration of patient zero on our shores at the end of January, the global economy has been hit with wave after wave of falling stock markets, buckling supply chains and rising unemployment.

How Covid-19 will change the landscape of work

How WaveTrackR can help your remote team

When lockdown was announced on March 23rd, the nation was not prepared. It came suddenly and without much warning, the UK faced near-total shutdown. This time we are better prepared.

The market forces leading to a jobs boom in certain industries

How recruiters can help candidates pivot

Why applications are falling when redundancies are rising

What the recruitment world has learnt from 2020

2020 will go down in history as one of the most challenging, tumultuous years since World War II. Covid-19 has impacted the world in ways which will have long-lasting effects in many areas of our lives – both personally and professionally.

Will job location become irrelevant in a post-Covid world?

Essential skills for a post-pandemic recruiter

Do you want to know more about our data?