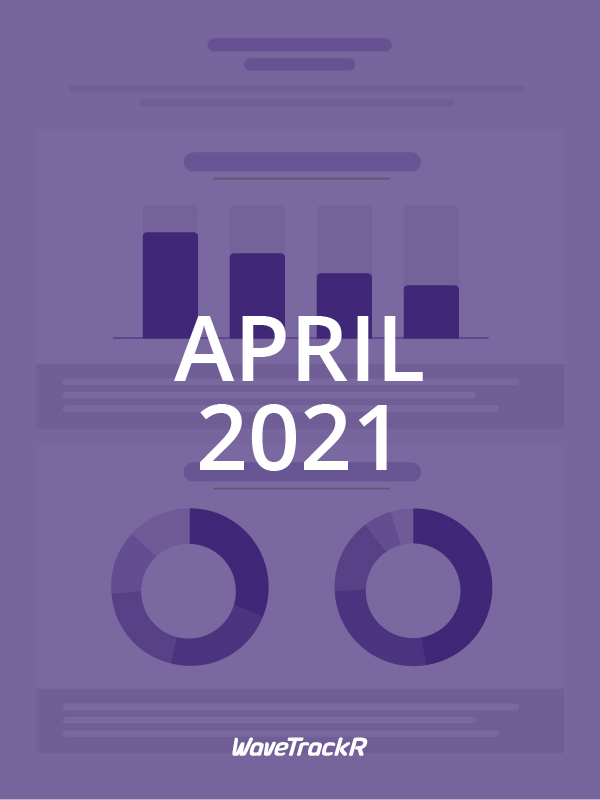 At first glance, the jobs data found in the WaveTrackR April report may feel disheartening. Both jobs and applications decreased from March figures, as did the average number of applications per job.

Jobs were down by 12% and applications decreased by 25% compared with March 2021. Average applications were also down by 2, the second month in a row that has happened. This decrease in activity may seem surprising but is being compared to a month that had an enormous spike in both jobs and applications.

As usual, most jobs were posted on a Friday but the majority of applications were received on Thursdays – almost an entire week later.

Jobs and applications both decreased from March but, at +145%, jobs remained far higher than the 2020 average and above January and February levels.

Applications may be at the lowest levels seen all year but are still 79% over the 2020 average. March was a particularly active month in every area, likely due to the many businesses allowed to open on April 12th ensuring they had adequate staffing for that milestone date. By April, most businesses would have filled their vacancies, accounting for the reduction in jobs as compared to March. The important point is that they remain strong when compared to the past year and given the UK is still in partial lockdown.

When looked at as weekly figures, it seems as though jobs may have suffered a temporary blip early in the month as they then rise steeply from mid-month. After their meteoric rise at the end of March to record figures, jobs experienced a slump at the beginning of April, dropping from 196% over the 2020 average to +64% and then to +61% before beginning a sharp upwards trajectory. The drop coincided with the two weeks either side of the long Easter weekend which may have contributed in a similar way to Christmas dips in job activity. What is interesting – and tremendously encouraging – is that they rocket upwards over the following three weeks, ending the month at a record 216% above the 2020 average.

Applications experienced more ups and downs but ended the month at 115% over the 2020 average – the second-highest level of the year. The figures for both jobs and applications are certainly going in the right direction.

Industries with most jobs and applications in April 2021

Public Sector, IT & Internet, and Education continue to be the most active industries for both jobs and applications. Education has climbed in both areas, proving that the sector is experiencing something of a boom.

Meanwhile, Health & Nursing remains amongst the top industries for job posts but without the corresponding volume of applications.

Accountancy, often seen as a stable career choice, has experienced a surge of applications, as has Manufacturing – again, both without a top spot for job posts.

Average application per job by industry in April 2021

Noteworthy this month is that Finance and Banking received the two highest average sets of applications per job (43 and 41 respectively), with Accountancy (38) in fourth place. Following a year characterised by uncertainty and massive job losses, many crave the stability of jobs that will always be needed and will take less of a hit if lockdowns were to occur again. The financial sectors offer just that.

At just 3, Health & Nursing received the lowest average applications per job. It is an industry that has historically suffered from a high turnover of staff and with many frontline workers having to isolate or falling ill, job to applicant ratios seem set to remain high for some time.