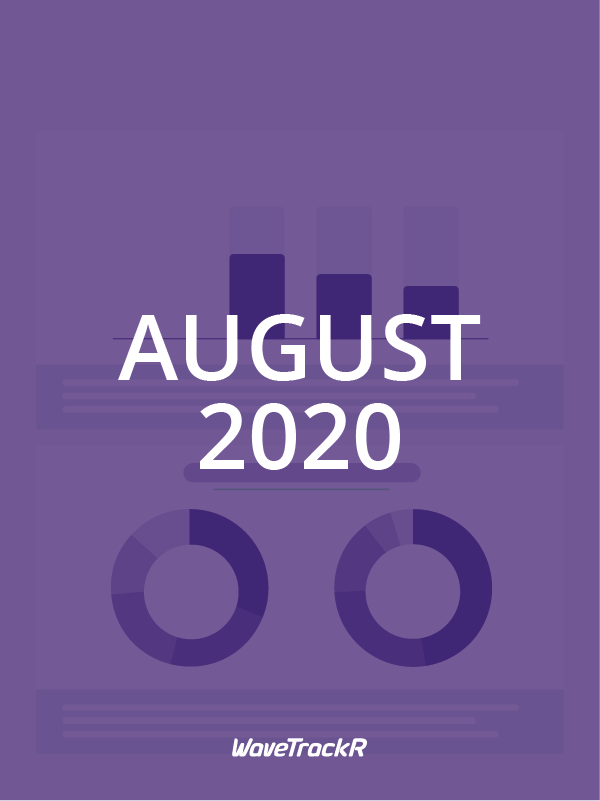 Applications remained high in August, not dipping below 100% above the March-June average. We didn’t see a solid upwards trajectory, with it dipping and rising week on week, but the numbers were consistently high.

Jobs were a different story, falling each week from a post-lockdown high of 73% above the March-June average in the week ending 2nd August. The final week of August saw a rise to 59% above the lockdown average – an improvement but nowhere near the soaring numbers of applications, meaning the disparity between jobs available and candidates applying continues to be wide.

Job Posting and Applications by Month

Applications registered record-high numbers for August, no doubt a reflection of the redundancies being made all over the country and the imminent end of the furlough scheme.

In August applications reached 110% above the March-June average, an increase of nearly 50% from the lofty application figures from July – a year-high at the time.

Jobs continued to be scarce and dipped by 6% from July. The positive news is that they are 31% above the lockdown average but, on the flip side, are are still far from the values recorded at the start of the year.

Most Popular Industries in August

The analysis per industry shows us where jobs are opening up and where the majority of  jobseekers’ skillsets lie – some show correlations but other industries show disparities that either indicate a skills shortage or a widening gap between jobs available and candidates searching and applying.

Public Sector (also high last month) and Transport & Logistics were the industries posting the most jobs in August, representing 14% and 13% respectively of all jobs posted. They are followed by IT & Internet and Property (having fallen slightly from last month), with 11% each, and Education with 9% of jobs.

Applications in Property are closely matched by jobs posted, receiving the joint-highest figures of 14%. The Finance Industry also received 14% of overall applications but didn’t manage a spot on the most popular industries for jobs, indicating a disparity between candidates searching for a job in this industry and jobs available. IT & Internet received 9% of applications, a similar figure to the industry’s jobs posted. Sales and Human Resources both received 6% but are not in the top spots for jobs posted.

As more industries open and businesses start to return to the office, the number of jobs available on the market is slowly increasing, but the imminent cliff-edge that will come with the closure of the furlough scheme at the end of October is guaranteed to bring more and more jobseekers onto the market. The hope is that, with schools returning in September, job posts will continue to rise to begin to meet demand.