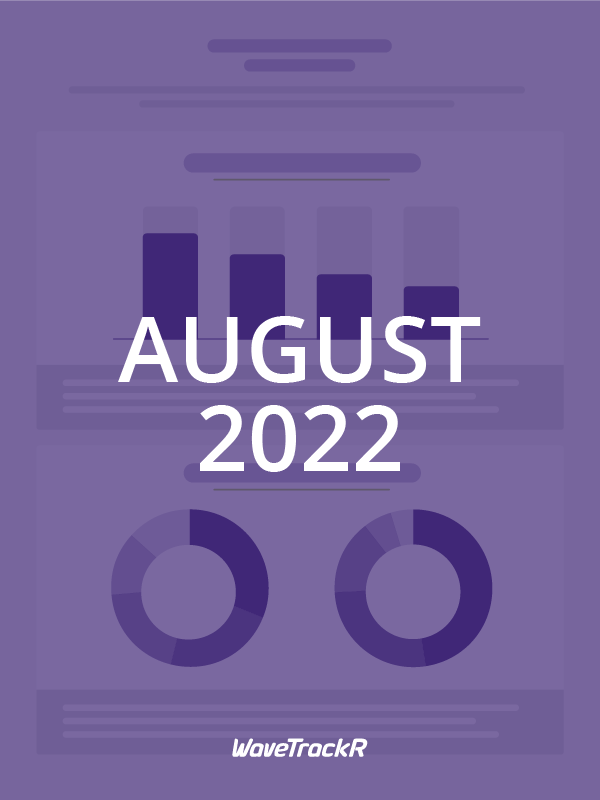 After a significant fall in July, jobs increased by 18% from July to August. Applications remained at precisely the same levels, with a 0% increase, but they didn’t fall. Given they only rose by 1% from June to July, it’s fair to say that application numbers are plateauing.

As a result of the increase in jobs but not in applications, the average number of applications per job has fallen from 15 in July to 13 in August.

For the fourth consecutive month, IT & Internet has posted the highest percentage of jobs and received the highest numbers of applications across all industries.

Tuesday is an incredibly active day in the recruiting world – it is the day most jobs are posted and the day that most applications are sent, proof that getting those jobs in front of candidates when they are actively searching is essential.

Following on from a month where we saw jobs dip below the 2021 monthly average for the first time this year, job posting in August was decidedly healthier. At 3% over the 2021 monthly average, it still ranks as the second lowest figure of 2022 to date, but considering that is an 18% increase on July, it means August was far more active. Given the annual trend for August is a slow-down in general job activity due to both recruiters and candidates being on holiday, this is a strong sign – even more so when you consider the current climate, with many businesses taking a cautionary approach to hiring thanks to rising costs.

Applications have plateaued but, again, this is an annual trend in August when active candidates take time out to reassess, passive candidates start to re-think their career choices whilst on holiday, and working parents wait until September when schools are back to make any big life changes.

Industries with most jobs and applications in July 2022

There is little change at the top of the job posting activity board, with IT & Internet yet again posting the highest percentage of jobs, followed by Health & Nursing and then Education. However, Public Sector & Services and Engineering have increased their percentage share, pushing Secretarial, PAs & Admin and Manufacturing out of the top 5.

The 5 industries receiving the greatest numbers of applications remains the same, with IT & Internet receiving an incredible 28% of all applications for the second consecutive month. Engineering received the second highest percentage of applications, though at 11% it is a long way from IT & Internet’s share. Health & Nursing again falls very short of applications compared to jobs posted, as does Public Sector & Services. On the flip side, Manufacturing may have the candidate numbers but jobs are falling.

Customer Services received the highest average number of applications per job by industry in August, as it did in July, although it has grown its average from 19 to 23. All other industries in the top 5 have changed from July. Management Consultancy and Construction both received an average of 18 applications per job, the latter of which has experienced a decline in jobs over the summer thanks to supply chain issues and the very real risk of recession affecting projects. Marketing, Advertising, PR and Accountancy (the latter often in this chart) both received an average of 17 applications per job.

Health & Nursing yet again received amongst the lowest average number of applications per job, receiving an average of just 3 alongside Not for Profit, Charities. As Health & Nursing posted the second highest number of jobs yet didn’t feature in the top 5 for applications, this is perhaps unsurprising. The same can be said for Public Sector & Services, receiving a relatively low average of 7 applications per job but posting amongst the highest percentages of jobs across all industries, yet didn’t feature at all in the top industries for applications received.

Notable for its absence on the lowest average number of applications per job this month is Travel, Tourism, Leisure, who received an average of just 2 applications per job in July. The recruitment drive and subsequent training times in an industry hit badly by COVID and then by labour shortages seem to be quickening pace.

Secs in the City yet again dominates when it comes to providing the highest average numbers of applications per job across the job boards. At 21, it provided recruiters with 5 more than the next highest – Caterer with 16. Niche job boards are continuing to deliver applications in industries with candidate shortages.

Totaljobs tops the generic job boards at 15 – 10 more than both Reed.co.uk and CV-Library. Niche job board CW Jobs achieved an average of 14 applications per job.