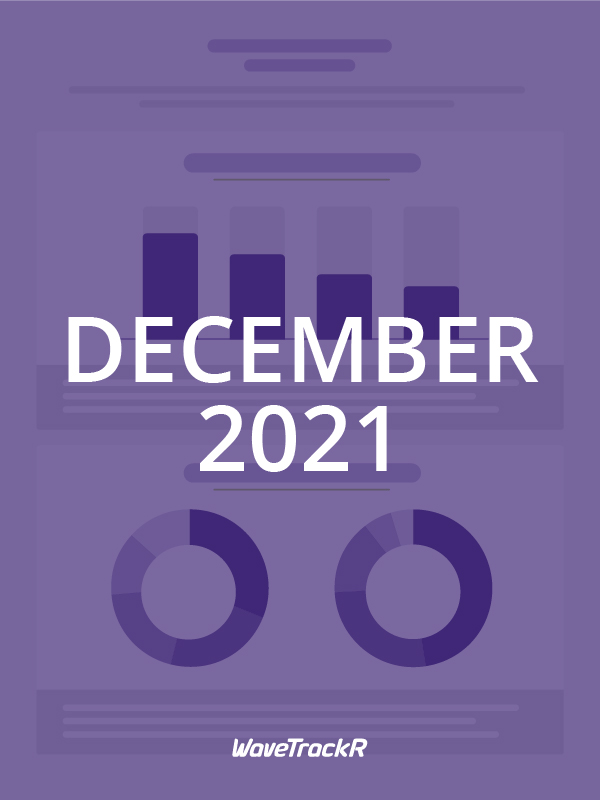 Both jobs and applications fell in December, the first time they have simultaneously fallen since April. However, the final month of the year is notoriously slow as businesses start to wind down activity and candidates take a break, ready to begin the search again in the new year.

Both jobs and applications fell in December, the first time they have simultaneously fallen since April. However, the final month of the year is notoriously slow as businesses start to wind down activity and candidates take a break, ready to begin the search again in the new year. A reduction in both jobs and applications was expected. Whether they pick up again in January will be the real test as to the state of the job market as we enter 2022.

Interestingly, we have a correlation in the day most jobs are posted and the day most applications are received – both mid-week, on a Wednesday.

At 301% over the 2020 monthly average, jobs reached their lowest level since July. Cause for concern? Unlikely. This is a seasonal trend as businesses put a pause on recruitment efforts as the year wraps up and employees take holiday. Applications also dropped, to 110% over the 2020 monthly average from 145% over that average in November. This is likely to be both as a result of fewer jobs on the market and as candidates, too, take a break and time to reflect before resuming their job search in January.

The weekly graph highlights the pause in activity between Christmas and New Year, when businesses slow right down or shut altogether over the holiday season. Jobs flip-flopped in the first few weeks of the month, falling to 281% above the 2020 weekly average and then soaring to 488% above that average – the highest jobs have reached all year. They then fall again and drop to a barely active 3% in the final week of the year.

Application numbers weren’t quite so dramatic but the trajectory across the month was similar. What the weekly graph proves is that the dip in both monthly job and application figures for December is wholly down to the relative inactivity over the holiday period.

Industries with most jobs and applications in December 2021

Manufacturing and Engineering received the highest numbers of applications (alongside Education) but aren’t posting a similar volume of jobs, an indication that there still aren’t the jobs to meet the demands of candidate numbers in those industries.

Average application per job by industry in December 2021

Health & Nursing and Public Sector continue to receive low numbers of applications per job, tallying with the high jobs and low applications recorded. Travel, Leisure & Tourism makes a new entry onto the board, receiving an average of just 4 applications per job. The question that must be asked is how many in the Travel sector (in particular) have now permanently switched careers in the face of continued uncertainty in the industry?