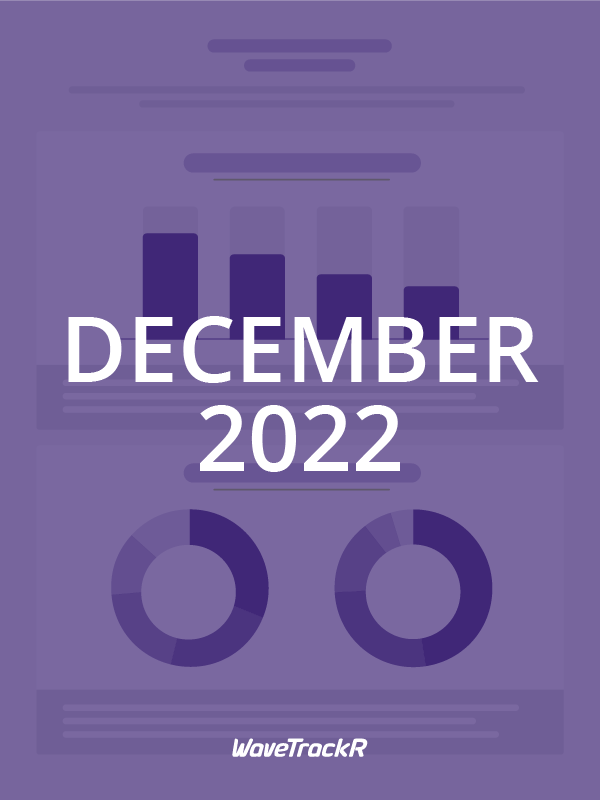 The WaveTrackR December 2022 Recruitment Trends Report has found that both jobs and applications dipped considerably in December compared to November, with jobs falling by 25% and applications by 22%. A drop in activity is usual in the final month of the year as businesses, employees and candidates wind down for the Christmas break but continued economic uncertainty could also be playing its part.

Both jobs and applications dipped considerably in December compared to November, with jobs falling by 25% and applications 22%. However, a drop in activity is usual in the final month of the year as businesses, employees and candidates wind down for the Christmas break.

The average application per job figure remains the same as November, at 13.

IT & Internet has posted the largest numbers of jobs and received the highest percentage of applications for an incredible 8th consecutive month.

The most active weekday changed in December to Thursday for both jobs and applications.

Job Performance and applications per month

Jobs fell to the joint lowest they have been for the entirety of 2022, matching July’s shock low figures of 13% under the 2021 average. Applications were also incredibly low – at 8% above the 2021 average, application numbers were the lowest experienced in 2022.

However, a drop in job activity in December is a seasonal trend arising from an annual slow-down as we approach the end of the year. Many businesses close for at least part of the week between Christmas and the new year, employees take holiday, children are off school and candidates may also take a break from the job search. We should expect to see both job and application figures rise in January with the zeal of a new year so watch this space.

Industries with the most jobs and applications in December 2022

The two industries receiving the highest average number of applications per job – Finance at 24 and Accountancy at 20 – are both financial services sectors. In uncertain times – both economically and politically – job security zooms to the upper end of the priority list for candidates and financial services industries have a reputation for being relatively secure. Retail & Wholesale jobs, also high for average application per job, are popular in the busy festive period.

Health & Nursing again finds itself receiving the lowest average number of applications per job – just 2 in December. This may reflect the historic but growing fight for fair wages and support in the industry which saw nurses across the UK strike in December.

Totaljobs received the highest average number of applications of the generalist job boards at 13, followed at a distance by Reed.co.uk and CV Library, both at 5.