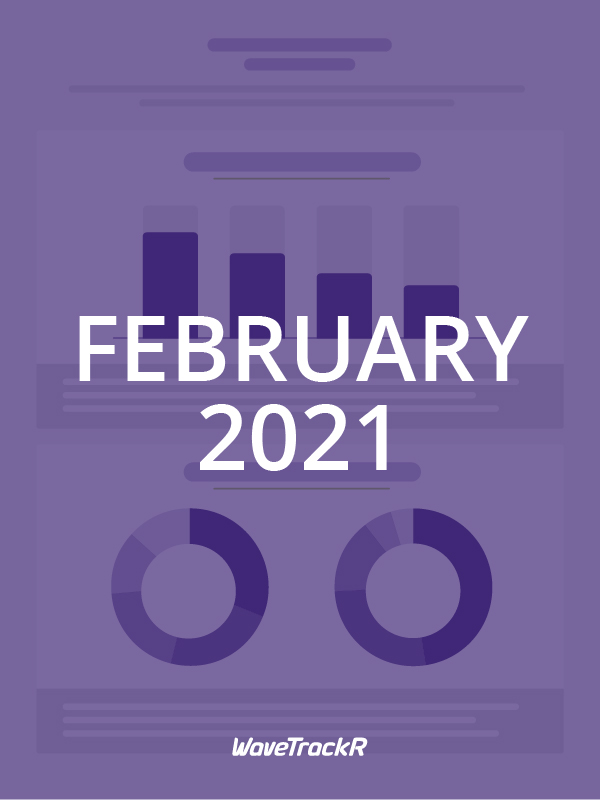 Although February saw a slight decrease in jobs overall, WaveTrackR data shows that in the final week job posts climbed to 123% over the 2020 average, just 2% under the highest seen all year. Applications, too, rose in that final week to +96%.

Overall, jobs are down by 7% in February compared to January, applications are up by 1% and average applications per job increased by 1 so not a huge amount of difference in activity as we head into the second month of 2021.

One slight change is the day that most jobs were posted – Thursday rather than Friday. However, the day most applications are received remains unchanged as Tuesday – a full five days from the day most jobs are posted.

Jobs and applications by month

Jobs are down slightly and applications remain at a similar level to January.

Both are significantly higher than the 2020 average which is incredibly encouraging and hints at positive change in the job market and the economy as a whole.

The swift and efficient roll-out of the vaccination programme and announcement of the roadmap to recovery has put a bounce in the step of organisations throughout the UK and injected confidence into businesses.

Although whilst looked at as a whole February experienced a slight decrease in job posts, it ended with jobs at 123% above the 2020 average – just 2% under the highest we have seen all year. Applications, too, dipped during mid-month but rose to 96% by the last week of the month, which is the joint-highest seen all year (matched only by the first week of February).

The reason must surely be greatly influenced by the government’s announcement of the four steps to ease lockdown – the UK’s roadmap out of restrictions and the gradual re-opening of the economy. Every industry now knows where they stand and can make necessary preparations. Even those such as Travel, Events and Night Time Entertainment that still have to wait for at least 3-4 months to open again now have a provisional date to work towards. It has been a long time coming and has breathed life and hope into industries that have effectively lain dormant for a year, as well as those which have had to open and close with little warning since the first lockdown.

Industries with most jobs and applications in February 2021

Unchanged from January, Public Sector posted the most jobs and received the highest percentage of applications. It has, however, increased its share, proving that it is by far the most in-demand industry.

IT & Internet has also increased its share of jobs posted from January, climbing from 16% to 19%. Health & Nursing,

Property and Education complete the top five. All are industries that have found themselves overstretched as a direct result of the pandemic, either because of changing market conditions or to tackle problems arising from it.

All bar one have equally high percentages of applications – Health & Nursing, which seems to be experiencing a skills shortage.

Engineering once again finds itself amongst the industries receiving the highest applications but without a corresponding level of job posts – not good news for candidates looking for a job in Engineering.

Average applications per job by industry in February 2021

At 77, the industry with the highest number of applications per job is Finance. It is an industry that is seen as relatively future-proof and offers attractive remuneration but confidence has been shaken by Financial Services essentially being left out of the Brexit trade deals. Talks are ongoing but it has been another blow to the sector following the impacts made by the pandemic.

At 72, Recruitment Sales experienced a similar average number of applications per job, proving that the sector is still hurting and competition for jobs remains stiff.