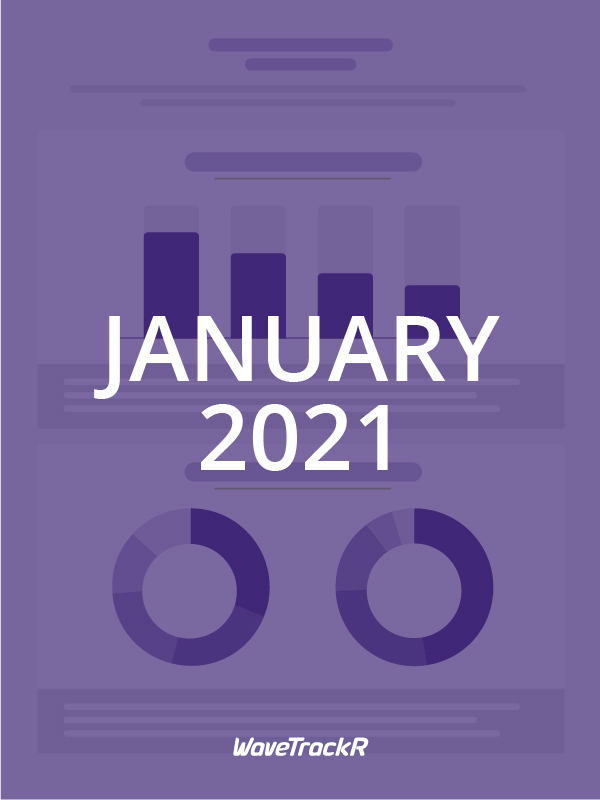 WaveTrackR’s January recruitment data showed the jobs market has experienced a surge of confidence, hitting the ground running as we forge ahead into 2021.

January is usually a stronger month than December in terms of both jobs and applications – after a slow-down at the end of the year, businesses are ready to start hiring again and there is often a new year, new job mentality.

However, these times are anything but usual and this year began with yet another lockdown. It is therefore incredibly encouraging that businesses are still hiring, likely due in part to a huge dose of hope arising from the quick and efficient vaccine roll-out across the UK.

Most jobs were posted on a Friday and yet most applications were received on a Tuesday, proving that the best time to post a job is at the beginning of the week. That way you’ll get your jobs in front of candidates when they are actively searching.

WaveTrackR data from January has shown that the jobs market has experienced a surge of confidence, hitting the ground running as we forge ahead into 2021.

Given the first three days of January fell in the same week as the tail-end of December it is unsurprising that jobs and applications were low.

What is remarkable is the huge spike in jobs in the week beginning January 4th. Although England’s third lockdown didn’t legally come into force until the 6th, it was announced on the 4th, so the fact that a relatively huge number of jobs were posted in that week is incredibly positive.

Job posts halved in the following week but rose week on week, ending the month just 12% short of the second week peak of 125% above the 2020 average.

Applications have been steady across the month, experiencing relatively small peaks and troughs and ending the month at a strong 77% above the 2020 average.

Industries with most jobs and applications in January 2021

Public Sector posted the highest percentage of jobs for the second consecutive month but increasing its share by 4% to 21% of the total jobs posted. The top 5 remains unchanged from December but with IT & Internet posting slightly more and Education slightly less.

Average application per job by industry in January 2021

This set of data gives us sharper insight into the industries with huge candidate competition and those which are struggling to receive applications.

At an average of 98 applications for each job advertised, Recruitment Sales tops the chart. Jobs are receiving a massive 83 applications more than the average across all industries, indicating a low job/ high candidate arena. Finance has been hit over the past year too, with the FTSE 100 suffering the worst year since the previous financial crisis. Many businesses are looking to shed expenses where possible and Management Consultants may be a casualty of that. The Travel, Leisure & Tourism industry has been one of the most severely affected by the pandemic and the huge number of Engineering contractors being let go was discussed in the November 2020 report.

Looking at the industries receiving low numbers of applications, many are currently experiencing skills shortages. Electronics and Science only received an average of three and four applications per job respectively. Others, including Social Services and Health & Nursing, are severely stretched due to the pandemic.