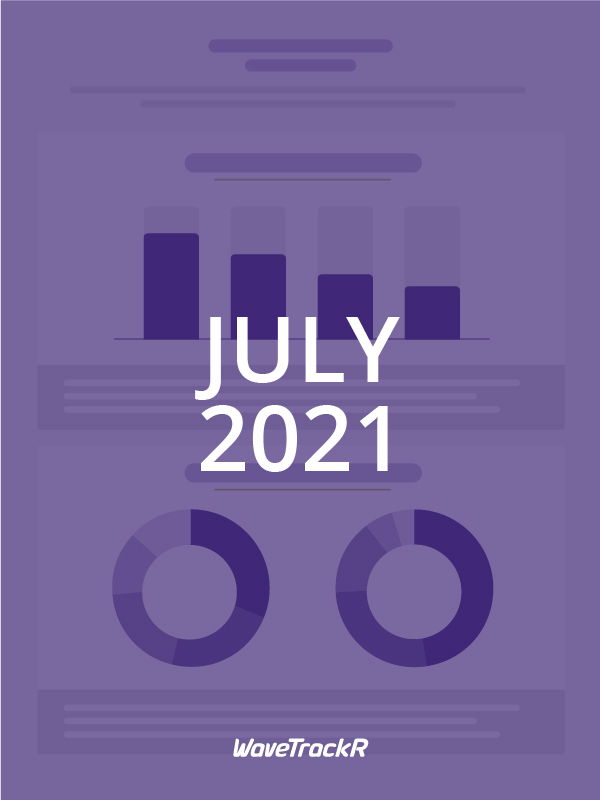 The WaveTrackR July Report has shown that jobs continue to rise. However, applications fell for the second consecutive month and average applications per job dropped for the sixth month in a row.

For the second consecutive month applications have dropped, this time by 6%, an increased fall of 5% compared to June’s 1% drop. Jobs have yet again risen, by 6% this time.

The day of the week on which most jobs were posted in July was Friday but the majority of applications were made on a Monday – a trend that is as yet unbroken.

With Freedom Day signalling the end of all restrictions on the 19th and as the number of those receiving either a first or a second vaccination mounts, jobs continue to rise.

When looked at across the month, applications’ gentle fall becomes clearer. No peaks and troughs, just a gradual decline as the month progresses.

Jobs, meanwhile fall and rise throughout July, ending the month at the highest figures seen this year. Overall we have seen another rise in jobs but is this month-end peak indicative of the beginning of a summer of jobs in August?

Industries with most jobs and applications in July 2021

Health & Nursing has posted an extra 7% of jobs in July compared to June, making it the industry posting the highest percentage of jobs this month. Yet again, however, it does not feature amongst the industries receiving the top 5 highest numbers of applications – further proof that Health & Nursing is suffering from a huge deficit of candidates.

The other industries in the top 5 for job posting remain in very similar positions to June, with Education, Public Sector, IT & Internet and Engineering all posting a relatively high number of jobs.

The industries receiving the highest numbers of applications also didn’t change from June, although Manufacturing has gone from 4th to 2nd highest. Manufacturing continues to be squeezed by supply chain disruptions, leading to a fall in the sector in the IHS Markit/Cips purchasing managers’ index.

Average application per job by industry in July 2021

For the third consecutive month, financial services industries received the highest average applications per job, with Insurance, Banking and Finance taking the top 3 spots. However,  their averages fell far short of June’s averages. Insurance, for example, received an average of 46 applications per job in July compared to 70 in June.

Secretarial, PAs and Admin continues to receive a high number of average applications per job but Electronics has dropped off the list to be replaced with Construction. The Construction industry grew at its fastest rate in 24 years in June and with the boom in housing, many are turning towards the sector as a stable career choice.

On the other end of the spectrum, average applications per job fell yet again in Health & Nursing, reaching a figure of just 1 in July. Given it posted the highest number of jobs this month, we are now seeing a serious skills shortage in the sector.

Interestingly, Education received amongst the lowest average numbers of applications per job, despite it being in the top 5 for applications overall. Clearly, the jobs boom in Education means jobs are plentiful enough to balance a high overall number of applications.