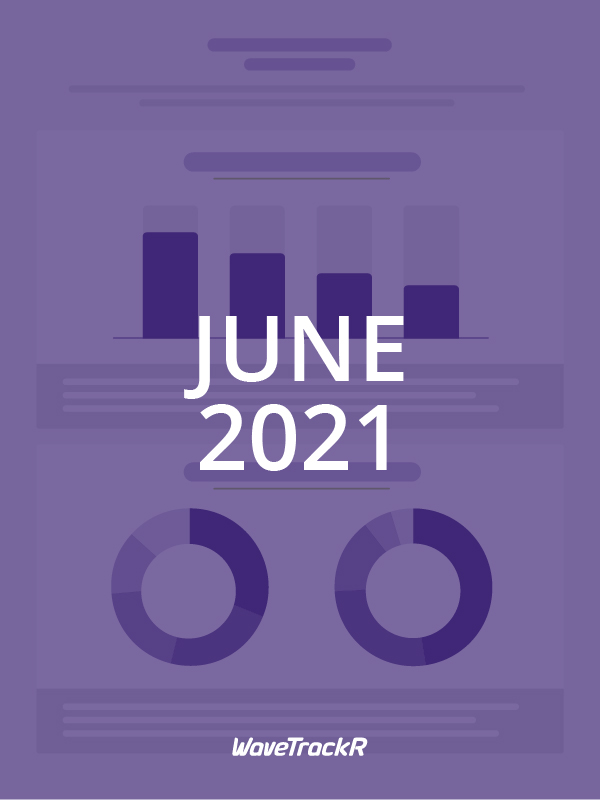 WaveTrackR’s June report has revealed that the market is beginning to change. As jobs continued their seemingly unstoppable upwards trend in June, climbing a further 5% from May, applications dropped.

Jobs continued their seemingly unstoppable upwards trend in June, climbing a further 5%. Applications, meanwhile, have stabilised, dropping 1% from May.

The steady reduction in applications over the year following a period of time in which the majority of recruiters were being inundated by an influx of applications has certainly not gone unnoted.

The day of the week that most jobs were posted has changed to Thursday but most applications are still made towards the beginning of the week, on Tuesdays. It, therefore, follows that to find those candidates when they are most actively searching for jobs, recruiters should consider posting earlier in the week.

Job postings increased from May’s figures of an already strong 219% above the 2020 monthly average to 235% above that average in June.

As industries continue to re-open and the vaccination programme ramps up to cover all adults, the market is picking up across most industries. Hiring is clearly still on the increase.

However, applications are no longer rising. June’s average monthly percentage may only have dipped from 108% to 106% above the 2020 monthly average but against a rise in jobs, this is significant.

A lack of candidate availability has certainly not gone unnoticed in the industry. The reasons are likely wide-ranging, from candidate hesitancy amongst continued uncertainty, the furlough scheme holding back the market, a lack of EU workers, and skills shortages, amongst other factors.

When the weekly statistics are looked at, it is clear that there was a spike mid-month in both jobs and applications, perhaps in anticipation of the proposed June 21st lockdown exit.

The announcement that the full end of lockdown would be delayed then caused a drop in both jobs and applications – from 275% above the 2020 monthly average to 198% above that average for jobs.

However, the jobs and applications figures for the final week of June are still higher than the first two weeks of the month. What we didn’t see for applications are the heady peaks experienced in April and May, indicating a general decrease in candidate activity in June.

Industries with most jobs and applications in June 2021

In terms of job activity, little has changed from May. Education posted the greatest percentage of jobs, followed by Public Sector, IT & Internet, Health & Nursing, and Engineering.

The industries receiving the highest percentage of applications hasn’t altered from May either, although the order has.

Education is no longer receiving as many applications, despite the fact that it still tops the chart for jobs.

Engineering is now the industry receiving the highest percentage of applications, though jobs have seemingly plateaued.

IT & Internet, Manufacturing and Public Sector are recording similar application numbers to May.

Average application per job by industry in June 2021

Financial services industries received the highest average applications per job for the second consecutive month, with Insurance (an industry not in the top 5 in May) claiming the highest at 70. It seems the combination of the lure of a stable career choice during continued global uncertainty combined with jobs lost to the EU as financial institutions relocate may still be at play.

With a relatively high number of average applications per job in Secretarial, PAs and Admin, is an increase in automation leading to a decrease in demand for such services?

Electronics, too, is new to the top 5, perhaps caused by both a historic skills shortage and supply chain issues (in particular semiconductors, which are in just about everything we use) affecting the market.

Health & Nursing continues to experience the lowest numbers of applications per job, remaining at just 2.

At just 3, Social Services is now receiving the second-lowest numbers of average applications per job. An industry with difficult to fill positions at the best of times, the need for social care services has risen during the pandemic whilst supply has dropped.