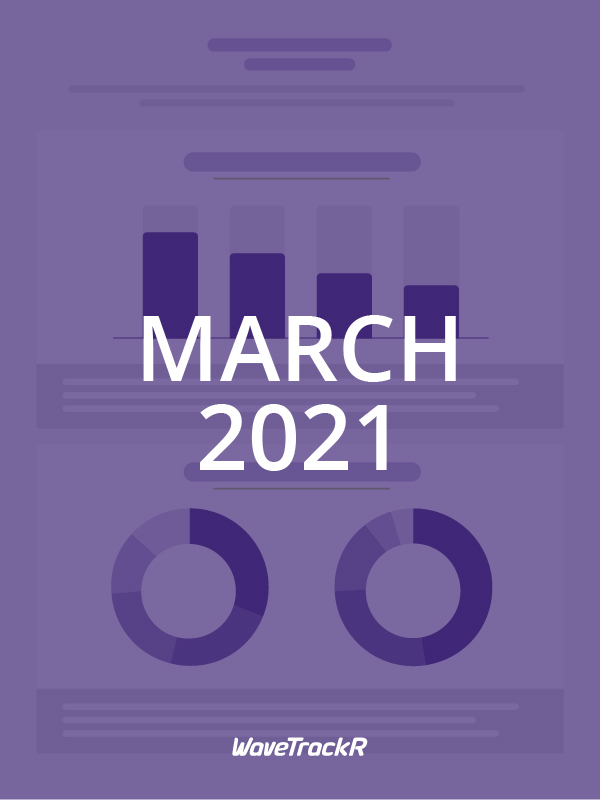 The WaveTrackR March Report has revealed that the final month of the financial year was an extraordinary month for job postings.

March saw a surge of job activity, with 50% more jobs posted than in February. 29% more applications were received in March than February, a healthy percentage that shows good application activity but larger job growth – great news for the economy.

Average applications per job are down by 2 from February – 14 from 16 – which is also an encouraging sign.

Most jobs were posted on a Friday in March but the majority of applications were received on a Wednesday. The days may have altered slightly but there remains a huge discrepancy between when most jobs are posted and when the greatest numbers of candidates are actively searching and applying.

Both jobs and applications soared in March, reaching the highest numbers we have seen since long before the pandemic began.

Jobs were up by an incredible 179% compared to the 2020 average and applications increased by 137%.

The reopening of schools, continued efficiency and speed in the UK’s vaccination programme and good signs for the roadmap to progress as planned has clearly encouraged businesses to look forwards towards a very bright light at the end of the tunnel and begin hiring again.

With pubs and restaurants opening outside and hairdressers, nail salons, non-essential shops, holiday lets, theme parks and zoos, gyms and leisure centres also all reopening on 12th April, many businesses will have resumed hiring in March to ensure they have adequate staffing in time.

Looked at from a weekly perspective, we can clearly see the steady upwards trajectory of job posting from the second week of February onwards, with the sharpest rise in the final week of March when they reached a record 196% above the 2020 average.

The rate of applications isn’t quite so smooth, largely climbing from early February but dropping from 135% to 111% above the 2020 average in the last week of March.

A larger jobs growth is incredibly positive and is perhaps partially an indicator that the huge numbers of unemployed workers are finding jobs, reducing the bulging candidate pool.

Industries with most jobs and applications in March 2021

Public Sector continues to post the highest percentage of jobs but applications have fallen from 19% in February to 12% in March. Could this be a reaction to what many have seen as an insult to NHS workers, the 1% pay rise that covers most hospital staff?

Schools reopening seems to have boosted the Education industry, which has posted 8% more jobs in March compared to February, taking it from 5th to 2nd highest. The sector also received 10% more applications than in February.

IT & Internet continues to post healthy numbers of jobs and the sector received the highest percentage of applications this month.

Yet again, Health & Nursing has posted a high number of jobs unmatched by applications.

Property posted similar levels of jobs to February but has fallen out of the top five for applications.

Manufacturing joins Engineering in the worrying situation of being amongst the top five for applications but not for jobs, indicating a lack of jobs to meet candidate demand.

Average application per job by industry in March 2021

Little has changed from February in this area, except for one notable addition to the list of industries receiving the highest average applications per job.

At 42, Travel, Leisure & Tourism received the third-highest number of average applications per job in March. This may possibly be indicative of candidates in these areas who had taken a break from their job hunt due to the closure of their industries over lockdown feeling bolstered by the imminent reopening of many areas.

With travel, leisure and tourism within the UK beginning to reopen from April 12th and international travel still a possibility for the summer, candidates are likely to have felt encouraged to begin applying for roles once more.