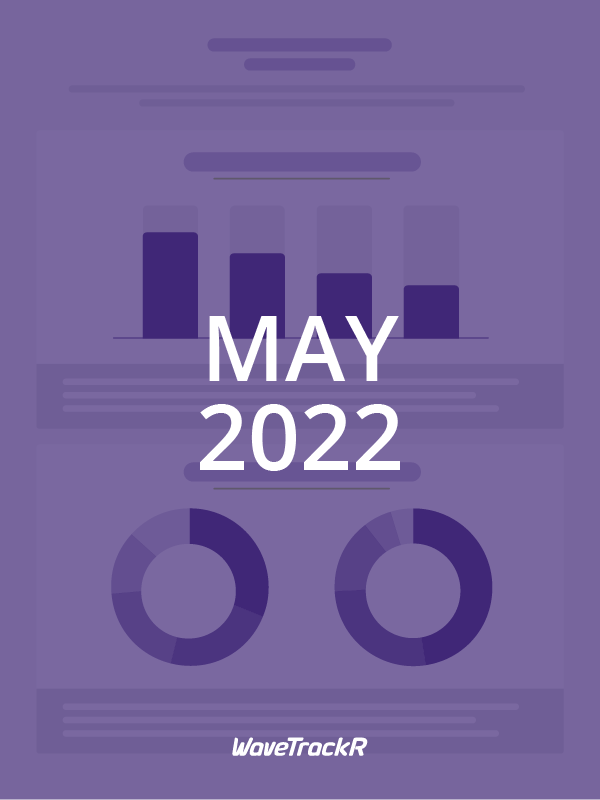 In welcome news following worrying economic predictions the WaveTrackR May 2022 Recruitment Trends Report showed that both jobs and applications have increased.

In welcome news following worrying predictions that businesses will begin to struggle due to inflation, rapidly rising energy costs and ongoing supply chain issues, jobs increased by 10% from April. Applications rose too, though only by 6%.

Application numbers had generally been improving up until April but we may now be seeing the affects of the war in Ukraine and soaring prices in people’s willingness to move jobs. Market uncertainty is very effective at putting the brakes on a job search, leaving people craving security in the jobs they are already in.

The average number of applications per job has fallen, from 12 in April to 11 in May.

IT & Internet take the crown for most active industry in May, both posting the highest percentage of jobs and receiving the most applications.

The highest percentage of jobs were posted on a Tuesday and most applications were received on Mondays and Tuesdays, which is really positive. It means that jobs are getting in front of candidates when they’re actively searching.

Jobs climbed to 15% above the 2021 monthly average in May, however that’s still less than half the figures witnessed in March so we’re still not seeing the dizzy heights they reached in the second half of 2022. Given the struggles SMEs are currently experiencing as a result of soaring inflation, rising energy costs, and global shortages of a wide range of goods, any rise in jobs is positive.

Applications, meanwhile, rose to 21% above the 2021 monthly average – higher than April’s figures but lower than any other month in 2022. Applications therefore remain sluggish but by no means as low as they were in 2021. We’re facing an interesting summer, heading into an autumn with even higher energy prices and, according to the Bank of England, with inflation possibly rising to up to a peak of 10% once the energy price cap is lifted in October. Businesses – especially SMEs – will undoubtedly be affected so we can assume that hiring plans will also be impacted to some degree. It’s very much a ‘watch this space’ scenario.

Industries with most jobs and applications in May 2022

Not much has changed from April in terms of the industries posting the most jobs and those receiving the highest percentage of applications. IT & Internet continues to dominate in both areas. This is a great sign considering the rocky start to 2022 the technology sector has had. LinkedIn News has reported a loss in market value of tech stocks in the first quarter and lay-offs in both venture capital-backed firms and tech giants such as Netflix and Paypal. Meanwhile, other large tech firms such as Meta, Uber and Snap have slowed hiring. The tech jobs market is only just being hit so it may be that we start to see a difference in figures over the next few months.

Health & Nursing and Public Sector are still on a hiring drive but lack the application figures needed to fill jobs. Engineering & Utilities is facing the opposite problem, with a high percentage of applications but comparatively low numbers of jobs. Education and Manufacturing have again posted relatively high numbers of jobs but also received healthy numbers of applications, suggesting supply is keeping up with demand. Secretarial, PAs & Admin, which featured on the high applications list in April is this month on both charts, indicating an uptick in jobs is helping to meet demand from candidates.

Average application per job by industry in May 2022

On the other end of the scale, the five industries receiving the lowest average number of applications per job remains unchanged from April. Travel, Leisure & Tourism received an average of just 2 applications per job, largely due to cutbacks in the workforce following COVID-related redundancies which they are now struggling to begin to replenish as tourism picks up again. This has become a real issue in some areas of the sector – you only have to look at the news to see the impact it’s having on the airline industry. Health & Nursing’s historic challenges around staff shortages continue and Human Resources, Public Sector & Services, and Not for Profit & Charities all also received low average numbers of applications per job again this month.

Average application per job board in May 2022

The 3 job boards receiving the highest average number of applications per job are all niche boards, with Caterer serving the Catering & Hospitality industry, Secs in the City specialising in Secretarial, PAs and Admin jobs, and JobServe traditionally IT & Internet focused – all sectors with high levels of applications but also relatively healthy job numbers. Career Structure is a new entry on this chart, another niche board but one which caters towards the Construction and Engineering industries. This proves yet again that industries with niche roles can receive fantastic results from niche job boards.