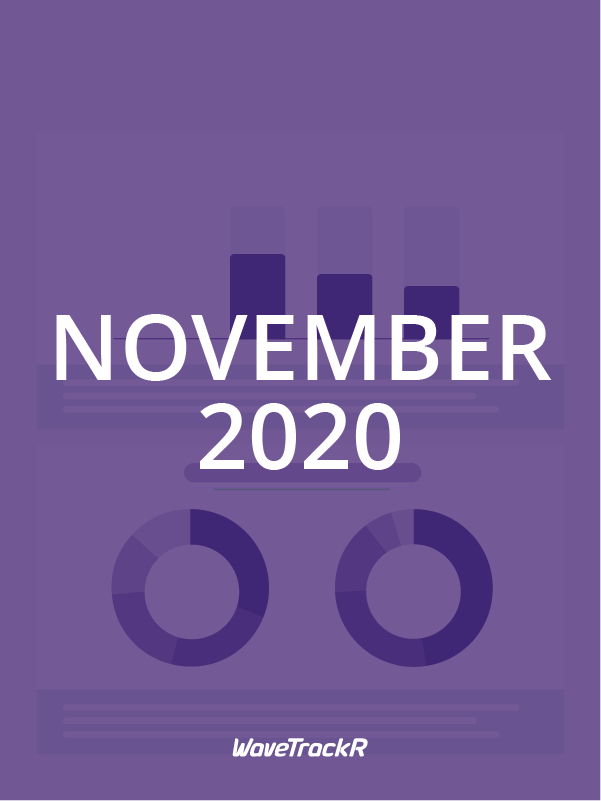 Applications have seen the biggest change this month, as we can clearly see from the graph plotting jobs and applications by the week. As the month began applications were 104% over the January-March average but when November came to an end they had dropped to 59% over the figures for that period – a quite considerable 45% decrease from the beginning of the month.

The biggest drop came in the final week of the month – in the penultimate week of November applications were still at +101%. We believe this reduction in applications is down to a number of factors, including the extension of the furlough scheme, seasonal trends (we expect to see applications fall as the year wanes), breaks for retraining, new business formation and sheer job search fatigue.

Jobs, meanwhile, continue to remain above the January-March average. They dipped by a few percentiles in the middle of November but rose again to 20% above Pre-Covid 2020 levels as the month closed. As news of successful vaccines dominated the news and we can finally start to look toward a future post-Covid, business confidence seems to be beginning to very tentatively return, despite the continuation of restrictions.

Both jobs and applications are down from last month but, importantly, remain above the January-March average. At 87% above the average seen in the pre-Covid months of the year, applications are still high but returning to slightly more manageable levels.

A dip in both applications and jobs is expected at this time of the year – it is a seasonal trend we see annually as the year wanes and everyone begins to wind down for the Christmas holidays, ready to start afresh in the new year. After an uptick in jobs and applications in October (which we also saw last month), as businesses ready their staffing levels and teams to start the year in earnest, November and December are usually considerably slower.

Other factors will be at play but we don’t believe there is anything to be concerned about. The main takeaway is that application and job levels remain above those from the first few months of the year, before the crisis began.

Most Popular Industries in November

The industries posting the highest number of jobs remains unchanged from October, although Education has overtaken IT & Internet to claim the top spot. Property has also risen above Public Sector this month, as the industry continues to boom. When looked at on a chart like this it is perhaps unsurprising that three of the five industries posting the lion’s share of jobs are those recruiting essential workers, whilst the other two have boomed as a direct result of the pandemic.

IT & Internet, Education and Property also take the top spots when it comes to applications – a welcome synergy, indicating those three industries are meeting demand for jobs.

On the flip side, Engineering has recorded a surge in applications over the past month, unmatched by jobs. As a highly agency-based industry whose contractors have shed most of their agency staff, many in Engineering have found themselves looking for jobs that are not being created. The majority of jobs in the Engineering industry lie in project development but Covid has forced many of those projects to be cancelled or postponed indefinitely. The energy sectors are experiencing a process of seismic change as the government is looking to build back greener but it will be at least 12 months before the green projects start to build momentum to reach the size requiring large engineering teams.

Recruitment Sales are still experiencing a high volume of applications without corresponding levels of job activity but the sector recorded 4% fewer applications than the previous month.