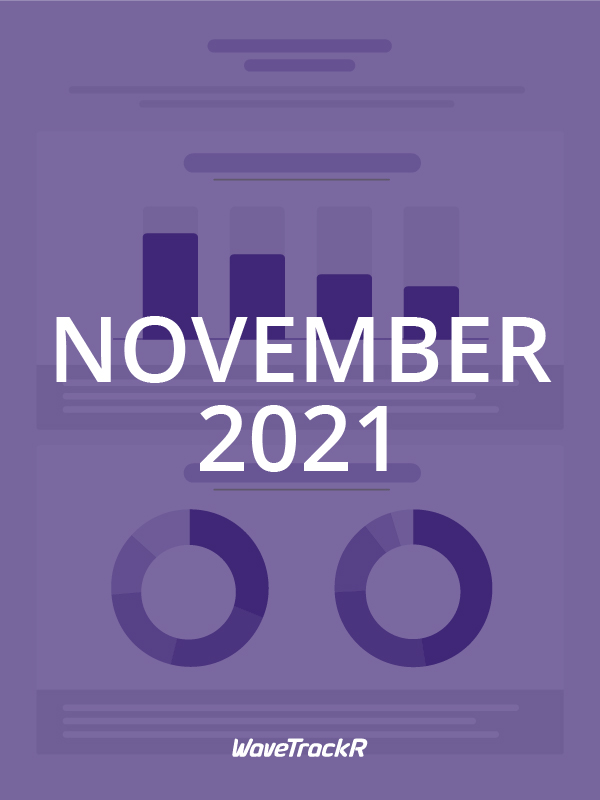 After a slight fall in October, jobs are on the ascendence once more. WaveTrackR’s jobs and applications data from November found an 8% rise in jobs, whilst applications fell by 1% following a 2-month rise.

After two consecutive months of rising applications, in November they plateaued, falling by 1% from October. Meanwhile, a month on from their first dip since April, jobs rose again. Given job activity often decreases in the final two months of the year, an 8% jobs rise is significant. At 9, average applications per job remains the same as October.

In November, most applications were sent on a Monday, continuing the trend for candidate activity at the beginning of the week. The majority of jobs were posted on a Tuesday.

What November’s figures do show is that the gap between jobs and available candidates is not narrowing. We will likely be experiencing a candidate-short market for some time yet.

The weekly data shows us that jobs remained on a fairly even keel throughout November, dipping in the second week and again in the final week but not by a huge amount.

Applications spiked to the highest figures seen all year in the first week of November but then fell each week following it, ending the month at the lowest figures since mid-September.

We could now be feeling the beginning of the end of year slow-down, where activity winds down as we head towards the Christmas holidays.

Industries with most jobs and applications in November 2021

Not much has changed from October in terms of the industries posting the highest percentage of jobs and those receiving the most applications.

Public Sector remains in the top 5 for jobs, although its percentage share has grown, placing it at the top of the charts. However, the sector is still not receiving equivalent numbers of applications, indicating the skills shortage is still a major issue.

IT & Internet, Education and Secretarial, PAs & Admin all find themselves in the top 5 for jobs and applications yet again – a good sign that candidate availability is closely matching vacant jobs in those sectors.

Health & Nursing continues to post high numbers of jobs whilst simultaneously being hit by low numbers of applications.

Finding itself in the top 5 for applications again in November, Manufacturing does not have an issue with low candidate availability but it is still not posting comparable numbers of jobs.

Average application per job by industry in November 2021

Media & Creative makes a new entry into this category, receiving an average of 21 applications per job, a number on par with Engineering (which remains unchanged from October).

At just 2, Public Sector and Health & Nursing remain the recipients of the lowest average numbers of applications per job. Agriculture, an industry that was hit hard by the exodus of EU workers following the pandemic and Brexit, received an average of just 3 applications per job in November, as did HR.