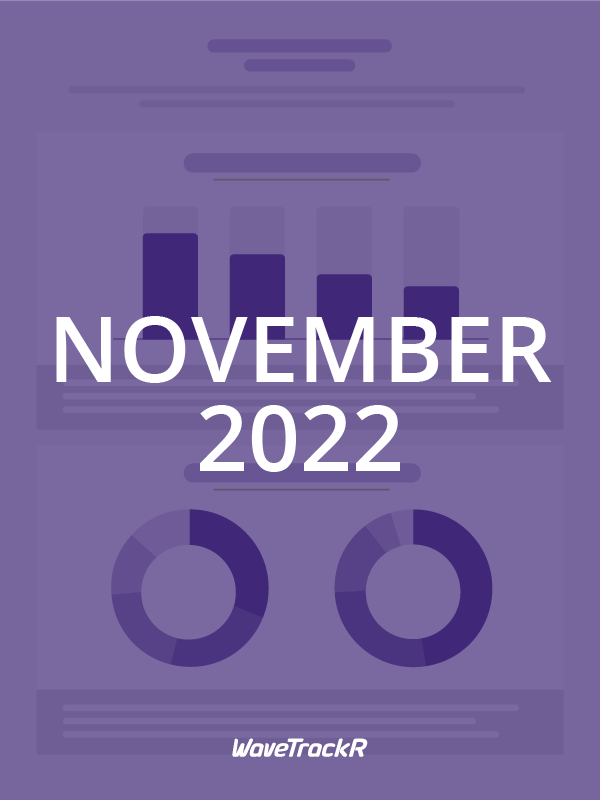 Jobs rise, applications fall – the candidate-short market doesn’t appear to be abating. The WaveTrackR November 2022 Recruitment Trends Report revealed that jobs rose by 17% but applications decreased by -7% from October to November, a trajectory we don’t often see in the last couple of months of the year.

Jobs rose by 17% from October to November, a positive rise considering they fell by 6% month-on-month in October and that we tend to see a slowing down of job activity in the final couple of months of the year. Applications, however, fell by 7% from October – the opposite trajectory to the one it took in October, when they rose by 10%. So, jobs rise, applications fall – the candidate-short market doesn’t appear to be abating.

The rise in jobs and fall in applications has reduced the average number of applications per job from 16 in October to 13 in November.

IT & Internet was yet again the most active industry both in terms of jobs posted and applications received, taking the top spot for both for the seventh consecutive month.

There’s been a change in the most active days – the highest percentage of jobs were posted on Wednesdays, whereas most applications were received on Tuesdays.

Job performance and applications per month

Jobs leapt to 16% over the 2021 average in November after dropping to bang on the average in October. It’s the highest we’ve seen jobs climb since June and is the joint third highest we’ve seen jobs all year. The fact that these figures are occurring in the penultimate month of the year, when job activity tends to decelerate, points to the strength of jobs in the market right now. The recession does not appear to be forcing businesses to freeze hiring.

The continued jobs push is likely due to labour shortages which remain as the year wanes. Applications fell to 39% above the 2021 average – still a long way over the incredibly low numbers we were seeing last year but a drop nonetheless. We might see these numbers pick up in a month or two when the ‘new year, new job’ mentality kicks in so watch this space.

Industries with most jobs and applications in November 2022

The industries posting the highest percentage of jobs and those receiving the largest number of applications hasn’t changed from October. IT & Internet continues to dominate across the board, receiving more than double the number of applications than the next highest industry, Secretarial, PAs & Admin, and seeing a percentage difference of 49% from the industry posting the next highest numbers of jobs, Education.

Both Education and Manufacturing make the top 5 for jobs and applications, indicating that candidates are responding to the decent number of jobs available. It’s a different matter for Health & Nursing and Public Sector, both industries which have large quantities of jobs but without the requisite quantities of candidates, as suggested by the low application numbers. Secretarial, PAs & Admin and Engineering have the opposite problem, with relatively high volumes of applications but not similar volumes of jobs.

Insurance and Retail & Wholesale are both receiving high average numbers of applications per job, as they did in October, although the numbers are considerably lower – 38 for Insurance in November, compared to 47 in October, and 20 for Retail & Wholesale in November, compared to a huge 54 in October. Finance, Marketing, Advertising & PR, and Secretarial, PAs & Admin all received an average of 19 applications per job. These numbers reflect the lowering of the overall average from 16 in October to 13 in November.

We’ve become used to seeing Health & Nursing on the board for lowest average number of applications per job and in November the industry received an average of just 3 applications per job – 10 under the overall average. The historical labour shortage in Health & Nursing is unlikely to change until a number of issues are addressed, with the upcoming nurses strike highlighting the grievances that are plaguing the industry.

In a change to the board, IT-focused JobServe has run away with the highest average number of applications per job – 18 to the next highest, 14. Another niche IT job board, CW Jobs, equalled Secretarial, PA & Admin-focused board, Secs in the City.  Also at 14 is the only generalist job board in the top 4, Totaljobs. Reed received an average of 6 applications per job and CV-Library received an average of 5. The figures certainly make for interesting reading.