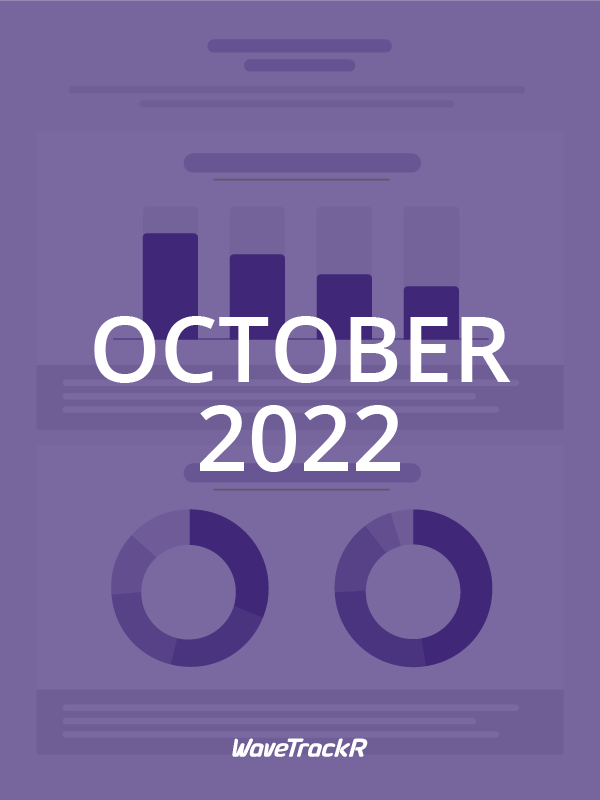 Applications rise to a 2022 record high, but jobs fall in the WaveTrackR October 2022 Recruitment Trends Report. Applications increased by 10% from September, rising to the highest levels seen in 2022. However, at the same time jobs decreased by 6% from the previous month.

Applications increased by 10% from September – really positive movement considering the continuing candidate-short market. Meanwhile, jobs decreased by 6% from the previous month, leading to the average number of applications per job rising from 13 in September to 16 in October.

Monday was the most active day of the week in October, being the day the majority of jobs were posted and the highest numbers of applications were received.

So what are we looking at? Could it be that we are starting to see a ramping up of people returning to the jobs market or seeking another job with a higher salary due to the cost of living crisis? And is the recent (and ongoing) political chaos causing uncertainty-fuelled caution amongst businesses? That, added to the rising costs for businesses and slowing down of the consumer market, may be leading employers to begin to put on the brakes when it comes to hiring.

Industries with most jobs and applications in October 2022

This data hasn’t changed much from September, with the same industries featured in the top spots. Secretarial, PAs and Admin received an even higher number of applications than in September yet still don’t have the jobs to support the candidate numbers.

IT & Internet’s jobs and applications have remained high, despite some very public and prolific layoffs and hiring freezes from Big Tech as well as some start-ups. There was a small fall in applications, potentially an early sign that candidates are beginning to become more cautious about changing jobs at a time when many tech companies are making redundancies. However, UK employment law means that the very sudden mass-scale layoffs enacted by companies such as Twitter and Meta couldn’t happen here. We may instead see IT & Internet job and application numbers altering over the next few months. The fact that jobs currently continue to be high is a positive sign that many SME tech companies and in-house digital departments are not currently slowing hiring.

On the other end of the scale, Health & Nursing yet again finds itself receiving a low average number of applications per job, as does Public Sector – both industries with historical skills shortages.

In a change from recent months, niche catering job board Caterer takes the top spot, providing the highest average number of applications per job of all job boards. JobServe, Totaljobs and Secs in the City provided the next highest average application per job numbers (15), followed by CW Jobs. Reed follows but at 6 compared to CW Jobs’ 14.