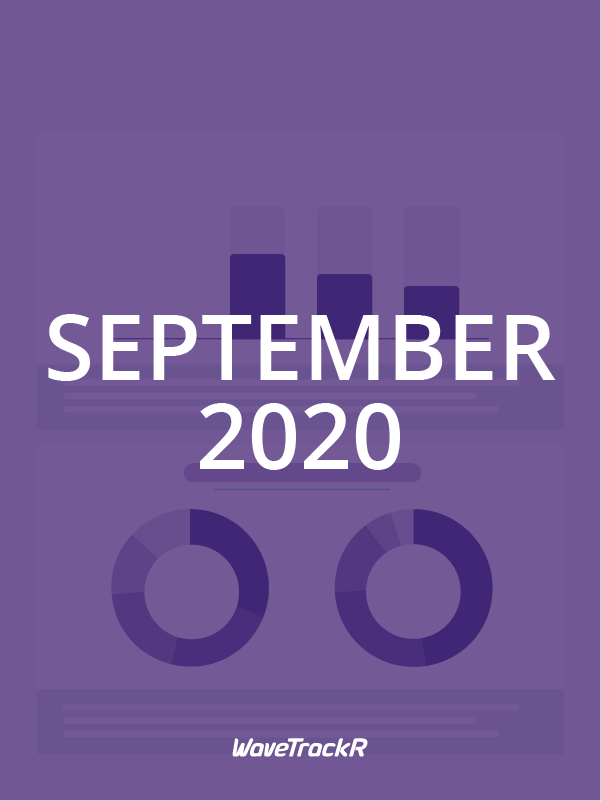 September was somewhat of a rollercoaster for both jobs and applications. Applications soared from 116% above the March-June average at the end of August to 156% above that average in the first week of September, and then to a year-high figure of 204% above the lockdown average the following week – a phenomenal peak. The rollercoaster then raced down the track to +132% before whooshing upwards once more to +184% and finally dipping again to +152% as the month ended and October began.

Jobs experienced a gentler rollercoaster ride, starting the month at 88% above the March-June average before gradually dropping down over the following two weeks, bottoming out at 33% over the average for that period. It then began to rise again, with an upward trajectory that ended the month at a post-lockdown high of 122% above the March-June average.

What we are left with at the end of September is a situation that is perhaps more stable – for now anyway – with applications falling to slightly more manageable figures (although still high) and jobs on the up. Hopefully, the market will continue to stabilise before we come to a precipice at the end of October when the furlough scheme comes to a close.

With the media’s dramatic headlines and a general sense of fear and uncertainty currently pervading, it is easy to think everything is falling apart once more. Looking at our graph detailing the job posting and applications month by month is therefore somewhat of a reality check – and a heartening one at that. It is quite clear from the graph that, despite what has been published and aired on the news, the jobs market is improving.

Applications have risen month on month from lockdown and are in far greater numbers than seen in this year’s pre-lockdown months. The figures are startling and have obviously been driven by mass redundancies but the good news is that jobs are also rising. The number of jobs posted is clearly far lower than application numbers and they still haven’t reached pre-lockdown figures for the year, but it is enough to represent a positive level of activity that we hope will continue.

Most Popular Industries in September

Property has had a fantastic month, being September’s most popular industry for both jobs posted and applications. As much of the economy is taking a battering, house prices continued to rise in September to meet a huge – and unexpected – demand for property. Following a total freeze in the market during lockdown which impacted deals and moves that had already begun to progress at the beginning of the year, the stamp duty holiday, and a tide of behavioural shifts driving a lifestyle rethink, the property market is booming.

As schools began to return in September, the Education sector posted the second-highest number of jobs. With staff having to periodically isolate for testing, jobs in education are likely to remain high. Perhaps unsurprisingly given the rise in digital services and products needed, IT & Internet remains a popular industry for both jobs and applications.

Finance received a relatively high number of applications but doesn’t make it into the top five sectors for jobs posted, highlighting a disparity between the number of jobs available in the sector and the volume of candidates seeking roles within it. The same applies to Engineering, a sector hard hit by the pandemic. Transport & Logistics and Public Sector posted relatively high numbers of jobs but the industries don’t feature in the top five for applications, indicating a skills shortage and a larger than usual demand for workers. These are two areas that could be bolstered by candidates struggling to find work in other industries. As some jobs fall away, candidates may have to look to those industries that are actively hiring, whether as a short term solution or as a longer-term career shift.